Where the Other Half Lives 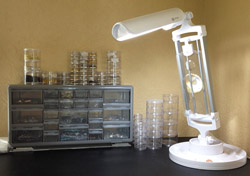 I mentioned previously that my house is so small that I had to divide up my clay and jewelry-making activities into two rooms. Well, here’s where the jewelry assembly portion of this one-person operation lives – in a corner of my bedroom. The clay table is in the other bedroom, which is my home office.

I had new windows put in my house a couple of months ago, and had to dismantle this table and pack up all the beads, tools, and half-finished projects. Well, today I finally got around to rearranging and organizing all that stuff! It took a couple of hours, but I think I can find things better now. I have so many different findings – bead caps, clasps, toggles, cord ends, charms, dangles, pin backs, and tons of other stuff – not to mention the beads themselves! All the findings are now in the storage drawers, and the beads are on top of it.